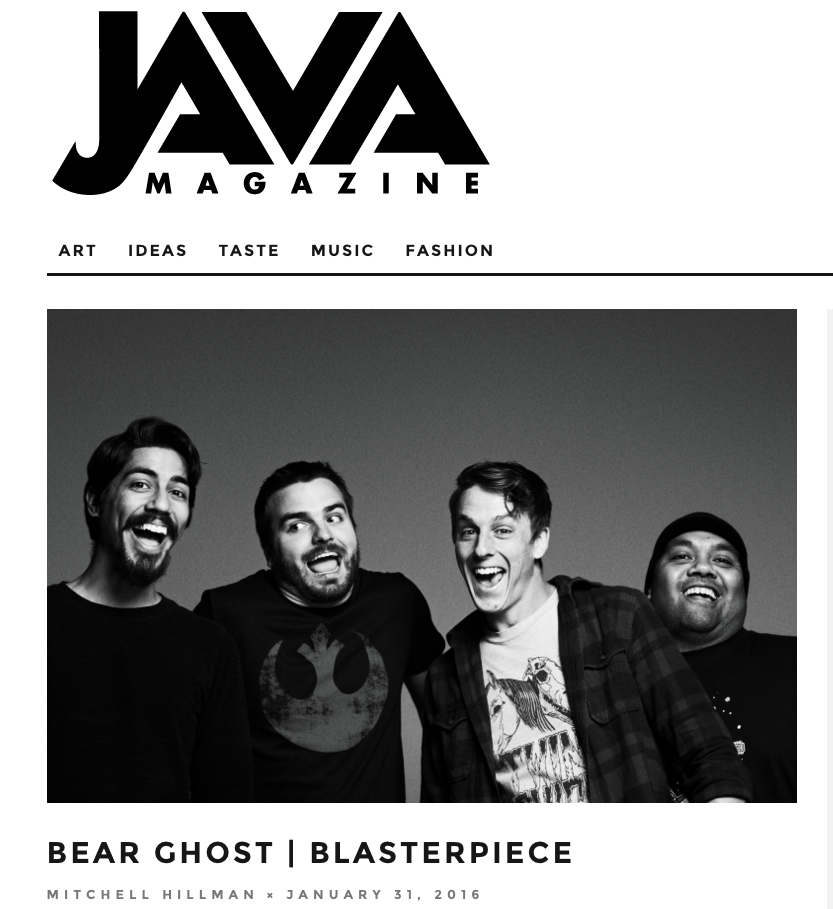 Bear Ghost has released an amazing album — a combination of sheer genre-bending musicianship, complex arrangements and vocal perfection. Sure, they have a lot of influences but they wear them proudly on their sleeves.

In the last couple years, Bear Ghost have emerged as one of the top bands to catch live in the Valley. Since they released their debut EP, Your Parents Are Only Marginally Disappointed in Your Musical Taste! in 2014, they have been blowing minds at venues all over town. I only caught up to them last year, but it appears I was just in time to catch some of the most entertaining live shows around locally. An electrifying set that includes not only their originals, but also covers of classic Queen and a handful of Disney songs (that’s right, Disney songs). These shows sold me on Bear Ghost, while making their new full-length Blasterpiece one of my most anticipated albums of the year. And after listening to it for days, I have to say that it doesn’t disappoint and lives up to the hype that’s been mounting in my mind for months.

Bear Ghost is Ryan Abel on guitar and vocals, Andrew Heath on bass and vocals, Myke ButtonZ on drums and Thomas Knight on guitar, keyboard and vocals. Together they have created one of the most unusual indie rock sounds around, not just in Arizona—anywhere. They combine elements of prog rock, indie rock, a little bit of punk, a touch of hip hop, some electronica and mash it all together to produce a consistent sound that is wholly their own. They make music that is decidedly fun. It’s fun to listen to and fun to watch. This energy goes a long way. When they put on a show, they actually put on a show.

There is a self-referencing introductory track called “Introduction to Blasterpiece” that kicks things off. It begins with bombastic drums and pounding bass, before launching into all of its theatrical splendor, with group vocals, archaic percussion and a brilliant guitar line that is larger than life. It sets the pace for all that is about to come and establishes their enigmatic sound from the start. Then it fades off into a harpsichord synth before they kick into the two album singles, back to back. The first is “Necromancin’ Dancin’,” which starts with a fantastic drum roll and a frenetic guitar, hinting at a touch of Primus. By the time the vocals come around, it feels almost emo, evoking early Panic at the Disco. With nearly four minutes of non-stop action, it’s easy to see why this was picked as the first single and also why it received such heavy airplay by local station KWSS.

“Funkle Phil” was the second single released prior to Blasterpiece, and it’s a fantastic rocker that propels you even further into the album. Synth strings kick it off, before the bass takes over. The vocals are totally reminiscent of Freddie Mercury in his most “vicious” moments. There’s even a bit of a rap that swings in around the one-minute mark before it breaks into some jump blues reminiscent of Brian Setzer Orchestra. It’s a fantastic ride.

Bear Ghost returns to more overt theatrics with the music-hall pop of “Gypsy.” They’re the only band I’ve ever known to mention the obscure group Tally Hall in their influences, and it shows in this particular song. This works in the same way that Queen could pull off a number like “Good Old Fashioned Lover Boy.” It will immediately bring a smile to your face and put a bit of swing to your hips.

“Starkiller” returns to the realm of rock ’n’ roll with frantic guitar work and an awesome chant to start things moving. The manic vocals have a hint of Danny Elfman at his best in early Oingo Boingo. The start of “Sickness for Nothing” slows things down with its subdued synths, gentle vocals and tender guitar line, while the rhythm section is appropriately low key. It, of course, explodes at the two-minute mark in the way that Muse creates audio hurricanes out of nowhere. Just as it hits its crescendo it moves seamlessly into the wry and pointed “She-Wrecks,” which is probably the most clever title here (get it?). The lyrics are very nearly vicious: “I wasn’t scared of your mean demeanor, yeah your skin’s a little dry and you’re much bigger than I, but you were mine.” While the guitars rage, the vocals, especially on the chorus, recall Black Parade-era MCR. There’s even a bit of video game synth tones injected in the mix. It finishes with a wild scream of catharsis.

“Hola Adriana” is one of the more straightforward songs on the album. It almost seems out of place in terms of how much it sounds like typical alternative rock. It’s amazing how a song can stand out for its sheer normalcy alone. They own it completely and eventually bring it into the quirky Bear Ghost realm by the end. There is a Southwestern-flavored coda that acts like a link track to set you up for the next song. “Paradise” begins like a show tune and has a barbershop feel with vocals and snapping. Despite its unusual arrangement, it’s catchy as hell, with a piano line that stands out and, dare I say, there are moments where the vocals sound a bit like early Maroon 5, if Adam Levine actually made pocket symphonies rather than feeding the hit machine.
Once the band kicks in, “All At Once” gets pretty dark and ominous, with slightly creepy theatrics in the vocals. At this late point in the album, it’s easy to marvel at the construction of Bear Ghost songs—especially here, with the strikingly different movements, telling as much of a story with the music as with the lyrics. It’s something of a classical approach to indie rock.

Blasterpiece finishes with “Prelude,” because why wouldn’t you end an album with a prelude? From what I understand, it’s actually a prequel to the opening track of their EP from two years ago. It’s a fairly gentle end to what has otherwise been an uproarious album, and begins with some of the most beautiful vocals and a lush gypsy rock feel. Yes, of course it explodes into a maelstrom of guitars and vocals by the end, but in an almost shoegazing, atmospheric way. Bear Ghost has released an amazing album — a combination of sheer genre-bending musicianship, complex arrangements and vocal perfection. Sure, they have a lot of influences but they wear them proudly on their sleeves. It’s all about how they put these elements together into an aural adventure—sort of like Mr. Toad’s Wild Ride becomes a rock album. Blasterpiece is indeed one of the most exhilarating albums I’ve heard in a while. Keep your eyes and ears on the band this year. If they are shopping for a record label, this will be the album to get them signed.