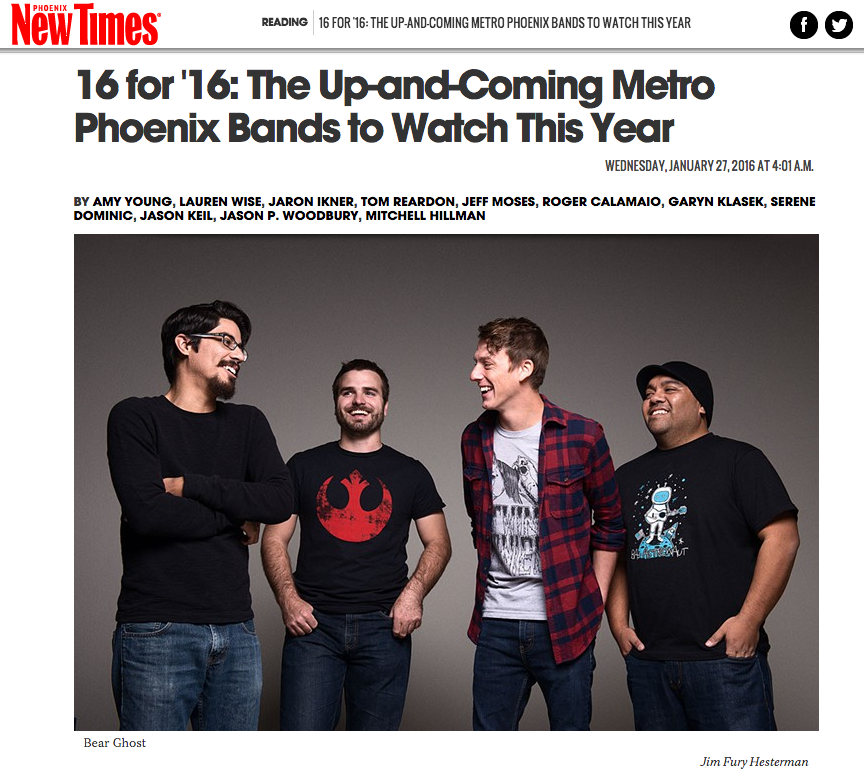 Bear Ghost has been active for a few years, but it seems the group fully realized its sound on its 2014 EP and gained even more momentum last year when it began to stun its ever-growing fan base with high-energy live shows. This year, the group is set to release its first full-length album, Blasterpiece.

“Blasterpiece is the most ambitious attempt at music we’ve ever made,” guitarist/keyboardist/vocalist Thomas Knight says. “There are four-part harmonies. There are video game sounds, super-colorful melodies, manic riffs galore. There’s even a little rapping. I guess in many ways, it’s like a bigger and better version of our first record.”

The combination of indie rock mixed with prog rock and even a little hip-hop is one of the most captivating and invigoratingly refreshing sounds to come out of Phoenix in the past few years. The band also adds an amazing “fun factor” to its songs, prompting fans at its concerts to break into spontaneous dancing and wide smiles. Sure, Bear Ghost also plays a handful of Disney covers and a killer take on Queen’s “Don’t Stop Me Now,” but the band’s deepest passion lies in its originals. Most recently, the group released two singles: last year’s “Necromancin’ Dancin'” and this month’s “Funkle Phil,” whetting fans’ anticipation of Blasterpiece, which will be celebrated at the band’s Saturday, February 20, show at Last Exit Live.

There is much more in store.

“We’re psychologically preparing ourselves for a tour, hammering out details for a music video and greasing the gears on a collaboration with one of Phoenix’s coolest artists,” Knight says. “We’re certainly going to be getting in everyone’s faces.”