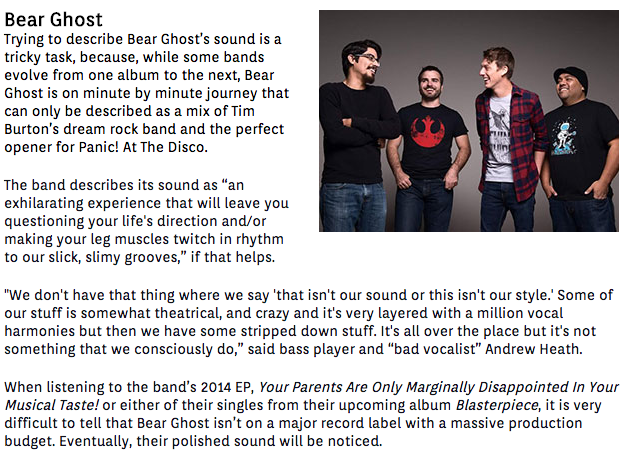 Bear Ghost
Trying to describe Bear Ghost’s sound is a tricky task, because, while some bands evolve from one album to the next, Bear Ghost is on minute by minute journey that can only be described as a mix of Tim Burton’s dream rock band and the perfect opener for Panic! At The Disco.

The band describes its sound as “an exhilarating experience that will leave you questioning your life’s direction and/or making your leg muscles twitch in rhythm to our slick, slimy grooves,” if that helps.

“We don’t have that thing where we say ‘that isn’t our sound or this isn’t our style.’ Some of our stuff is somewhat theatrical, and crazy and it’s very layered with a million vocal harmonies but then we have some stripped down stuff. It’s all over the place but it’s not something that we consciously do,” said bass player and “bad vocalist” Andrew Heath.

When listening to the band’s 2014 EP, Your Parents Are Only Marginally Disappointed In Your Musical Taste! or either of their singles from their upcoming album Blasterpiece, it is very difficult to tell that Bear Ghost isn’t on a major record label with a massive production budget. Eventually, their polished sound will be noticed.

The band recently won 98 KUPD’s Playdio contest, beating out nearly 30 other rock bands from Arizona and KWSS (93.9 low-powered) named the single “Necromancin’ Dancin’” the third best local song of 2015. Part of the reason for the notoriety is that other bands trying to get their name out there often rush to put out recordings and cut costs. Bear Ghost, on the other hand, has spent nearly $6,000 on recordings that it never even released, because the band didn’t feel that the results were up to snuff.

“If we don’t think it’s great, we’re not going to put it out there,” Heath said.

Bear Ghost is releasing its first full length album Blasterpiece on Feb. 20 with an accompanying CD release show at Last Exit Live. You can find the band at www.facebook.com/bearghostattacks