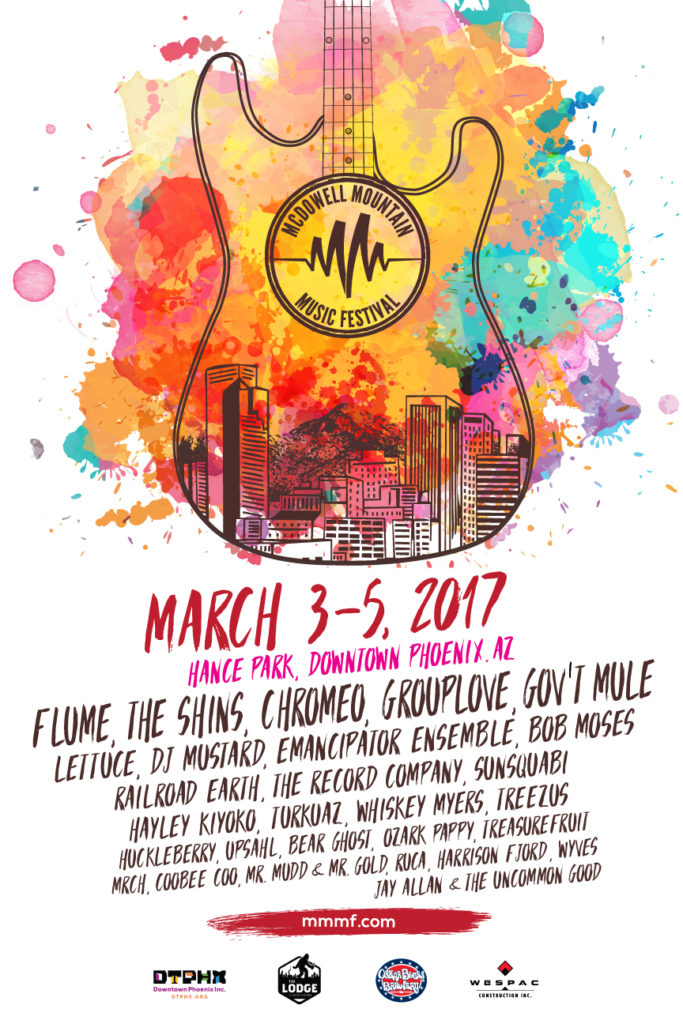 Phoenix, Arizona – November 3, 2016 – McDowell Mountain Music Festival is ecstatic to announce the lineup for the 14th annual music Festival on March 3-5, 2017. This year M3F brings top headliners to the Arizona music scene such as Flume, The Shins, Chromeo, and Grouplove. The lineup features numerous national artists such as Gov’t Mule, Turkuaz, and Bob Moses. As a grassroots, Arizona-based festival, M3F doesn’t forget the local talent like Bear Ghost, CooBee Coo and RUCA.

In an effort to remain true to its eclectic roots while evolving, M3F attracts music festival goers who are interested in a diverse variety of genres by bringing unexpected sound pairings to the Valley. “What really sets us apart from other music festivals, is our choice of artist’s year after year,” says Founder John Largay. “Our lineup ranges from national artists like Flume, who is completely reinventing the typical EDM sound, to world-renowned jam bands like Gov’t Mule and Railroad Earth, all the way to local Arizona artists that are on the rise, like seventeen-year-old, musical prodigy Upsahl.” He reminds us that the overall Festival goal started 14 years ago, “to continue to elevate Phoenix, AZ as a music and cultural destination. And to generate revenue for our local economy, including local artists and small businesses which are the oxygen that feeds the heart of the City.”

Along with the music, charity is part of the DNA that fuels M3F. From its inception, the Festival has donated over $1,000,000 for local Arizona charities. In the most recent years, M3F has teamed up with two local, family-based nonprofits: Phoenix Children’s Hospital Foundation and UMOM New Day Center.