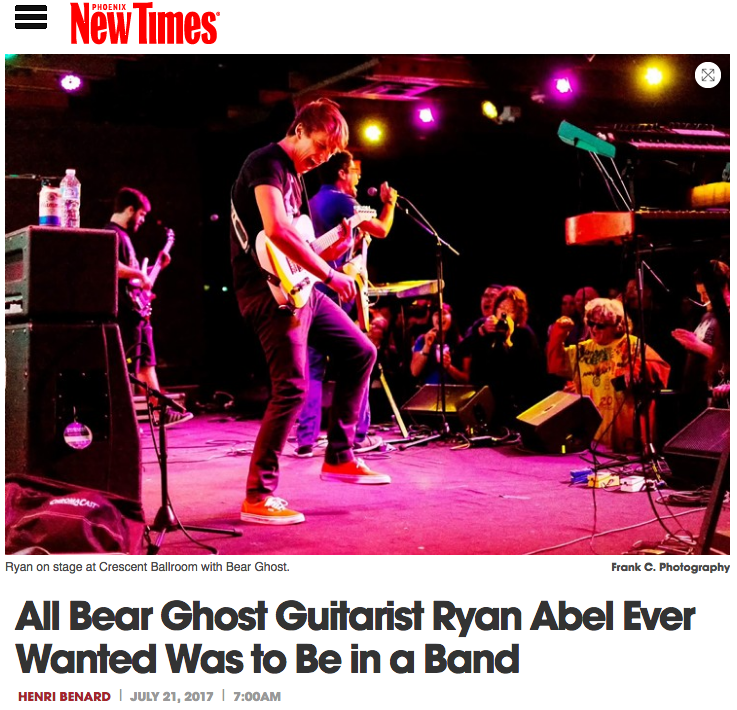 In Pound For The Sound, New Times gets technical with local musicians about what gear they use to create their signature style.

Bear Ghost’s Ryan Abel is a diehard fan of two things: Elvis Presley and Disney. The guitarist has had eight annual passes to Disney, and he’s currently on a three-year hiatus as he eagerly awaits the 2019 opening of “Star Wars Land.” In the meantime, he has plenty of time to rock with his band.

Abel is a great player with great ideas, and he’s a ton of fun to watch on stage. The dude never stops moving.

Born in Arizona, Abel’s family moved around a lot during his childhood. During that time, he started playing on piano at age 7 and he was really into bands like Jackson 5 and Hanson. Eventually, his family settled back in Phoenix, and he attended a small charter school called Sequoia in Mesa. At 13, he made the switch to guitar because he was listening to and emulating heavier, piano-free music. He was always into writing, recording his songs to tape with his basic multi-tracking setup back in his teenage years, but he was doing it solo. And the young writer wanted to play with others.

While attending Sequoia, Ryan really found the world of music he’s still part of today. He was in a School of Rock-type of program with other students. There, he built up a network of musicians, most of whom he continues playing with today. In fact, he has really only played with two groups of people in his life, and Bear Ghost is one of those groups, going seven years strong now.

You can catch Abel, and the rest of Bear Ghost, live in action on Saturday, July 22, at Crescent Ballroom for Wyves’ vinyl release show. With the show coming up, New Times talked with the guitarist about his sound, childhood gear, and music lessons.

As such, I’ve been narrowed down to two gain settings and a clean channel. I just run through my Orange Micro Terror with low gain, and max volume. So it’s clean, but can get a little spicy when I really lay into the strings. Then I have a Boss Super Overdrive pedal that I use for any distortion parts. And to make the more “bangin’” riffs really shine, I use the push switch on my HH Telecaster to activate the dual humbuckers as opposed to just the outside coils. So I suppose, it’s just one gain setting for chords, and I use my guitar as the second gain setting for maximum riffage.

What’s your favorite piece of gear in your collection and why?
Honestly, my favorite piece is my newest addition, and that’s the aforementioned Orange Micro Terror. I do not understand the tone I get out of this thing at all. It’s got a valve preamp, but a solid state output. And I guess growing up, I’d only heard people dump all over solid state amps, so I wasn’t expecting to be so enchanted with it. Plus, after years of lugging around a ludicrously heavy Blackheart half stack, the weight of the Micro Terror is really refreshing since it’s the size of a brick.

Any special pieces of gear acquired over the years? Any special story, or stories, behind your collection of tools?
Weirdly, the most sentimental piece of gear I have is something that I don’t personally even use. My first instrument ever was a Roland keyboard I got for Christmas when I was 9. And it is the same keyboard we still use on stage to this day, 20 years later. It’s got change rattling around in it and I feel like it’s missing more keys than it has. It still has worn out stickers on most of the remaining keys telling you which note they are, and I think we only use two sound effects on it.

The song “Gypsy” is just awesome. It actually reminds me of Queen’s “Bicycle” in the best of ways, so many crazy changes that all feel perfect. What was your role for recording and what gear did you on this track?
Thank you, kindly! I used next to no gear on this track. Just a borrowed acoustic guitar, a kazoo from the dollar store, and my astonishing vocal prowess. Gypsy was a song that my fellow guitarist, Tomtom, was playing around with for awhile, and my biggest contribution to the song was convincing him that we could pull it off in Bear Ghost. It’s unlike anything else we’ve written and consequently it is one of my favorite things we’ve done. Aside from playing rhythm guitar, I mostly helped with backing harmonies, and the kazoo harmonies in the bridge.

I just want everyone to know that the bit about my vocal prowess was a joke and that I am clearly hilarious.

You had said that you have never had a guitar lesson in your life, a decision you wish you could change. How do you feel this decision has impacted your career as a musician?
I just feel that with lessons, I would have written better music sooner. When learning to play when I was a kid, I would listen to songs and try and listen for every individual note in a chord and try and replicate it, and that’s how I learned to play chords. And for the longest time, I had no idea what chords I was playing. So I mostly stuck with power chords and riffs for the first 6 years of my guitar playing, which is not a good way to advance your skill set. With lessons, I could have gotten to the point I’m at now, probably within those first 6 years.

Bear Ghost is performing at Crescent Ballroom this Saturday in support of Wyves vinyl release show. Any words you wish to share with fans about the night?
Only that I’m insanely excited and honored to be a part if this show. This will be the last time that we play certain staples of our set as we will revamp and regroup after this, so come out and enjoy tons of rock ‘n’ roll with bands that I adore, and buy the new Wyves vinyl.